Unexpected Fun (is the best fun)

I’ll be honest, I’m not too big on team PVP games. I don’t know if that’s my inner shyness showing, that fear of pissing people off because I need time to learn before I’m not terrible, but it’s been a constant thing. Sure, I’ve joined things like guild PVP days in my past, playing stuff like WoW, but for the most part, it’s been a giant ‘NOPE’ for me. I generally am terrible at awareness in my own life, nevermind constantly figuring out how to not paint a giant target on my back in a game on purpose as ‘that person that basically is just asking to be sniped’. This is why, at best, I used to only raid – fights in most MMOs fall into patterns that I can memorize. Putting someone behind the seat of my enemies meant chaos.

That being said, Overwatch blindsided me a bit.Not because it existed – honestly, the idea was an unsurprising move for Blizzard, who seemed to recently be putting their hands in a lot of pots to try to broaden out from their two main IPs. What I didn’t expect was to feel much for it when I watched the initial stuff that came out, especially hearing it was a game that generally fell under a category I, as stated above, tended to avoid. But the more I watched, the more I realized something: I was excited.

I think it was the art style that pulled me in at first. Colorful with weird and interesting characters, it was kind of a feast for the eyes. Then I saw some of the game play footage and thought, you know, some of this looked fun. No, scratch that – it looked amazingly fun. Still, my general avoidance of the type of game won over in the end, and soon enough I forgot that initial excitement. I forgot about the game almost entirely, honestly, beyond noting the little battle.net icon once in a while.

I had forgotten I even signed up for beta.

Fast forward to this weekend. I noticed I had a Blizzard e-mail waiting for me and assumed it was an ad. It was, instead, an invitation to play in a stress test over Friday and Saturday, which apparently is to be the final one before launch next month. I considered it for a little while before firing up the installation. I had things to do the rest of the day, so it really wasn’t only until early evening I could give it a try. I was dismayed to find I was rubberbanding all over the place, though my internet is pretty stable and my computer has all that was needed to play. I decided to try later on, when it was quieter, to see how it was. Maybe, for some reason, it was beyond the scope of even my new computer’s abilities.

As it turned out, it had just been lag. It worked like a charm my second try. They must’ve got the kinks out entirely, in fact, because that was the last time I saw that problem. It was 10pm the first night I played, intent on only playing a few games. I ended up staying up until 2am and probably would’ve kept going had I not glanced at my phone’s clock. I was hesitant for a while to join in real games against anyone but AI, but soon enough I threw caution to the wind and decided to just go for it. I was a terrible shot but realized I wasn’t terrible at something very specific – support roles. 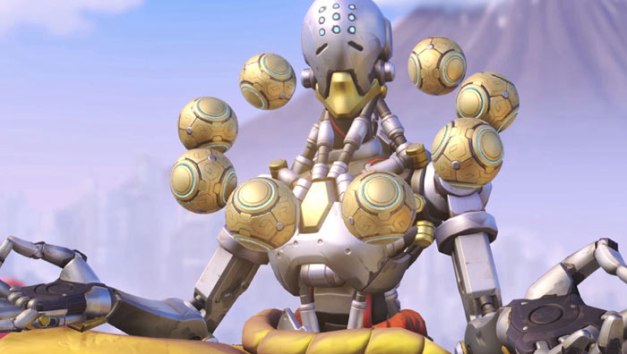 Sometimes you and a robot monk just click (source: Blizzard)

I learned later the above character, Zenyatta, is one of the harder ones to master, but for some reason I just felt comfortable playing him. Maybe it hearkens back to my love of hybrid PVE characters, but he could hit things and also heal and also look pretty cool when he does his group AOE where he looks like he’s a shining beacon of healing awesome.

I fully admit it: I was that person who stuck to one character for a while. Eventually, though, someone else had him first and I knew having two of the same support characters wouldn’t be ideal for the team. So I decided to try out Mercy instead, and then I realized I really, really liked Mercy. That was the rest of the time playing, by the way. Me slowly realizing I love literally every support character. I love Lucio the most visually even though he’s probably the least I’m good at, if only because of the music aspect to his healing. More importantly, however, I was having fun doing this. Sometimes I was terrible and I felt terrible because I did terrible. Instead of letting it get to me, I pushed on and told myself the next match would surely be better – and oftentimes I was right. Sometimes I was amazing and I was practically glowing with the praise I got – sometimes actual ‘gjs’ thrown my way, sometimes silent thumbs ups by way of the page of what I assume were the best overall players of the match. While I’m sure playing with an actual team adds a lot more pressure than randos on the internet, I actually began to wonder if I could one day actually become decent in this. I also felt like I learned some things about the game and myself, too, which I will now present to you all in an exciting list format. Without further ado:

STUFF I LEARNED AND THOUGHT ABOUT WHILE PLAYING OVERWATCH